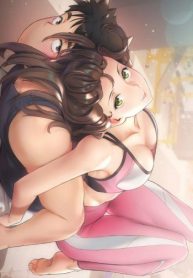 Bae Woong was once a strong and fit athlete – at least in his mind. Eager to get back to his old physique, he goes looking for a gym in the neighborhood. He stumbles upon one that seems oddly expensive and discrete. He isn’t even allowed to hear about the specific workouts they provide until after he signs a nondisclosure agreement. He finds it strange, but the women working there are very attractive and Woong has nothing to lose. After signing the agreement, he learns the secret to their bodies: sex.

Manhwa is the term used for comics published in South Korea. Its content is usually highly dramatic and romantic like Korean drama. Some famous manhwa18 such as The Bride of the Water God, Goong,…were transferred into drama and became so hot.